The 2017 vintage in Navarra and Rioja 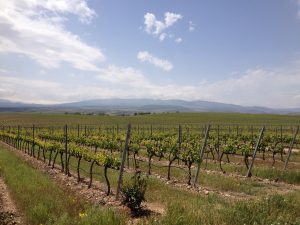 This vintage (2017) will be remembered as the earliest one to date in Rioja and Navarra wine regions. Season advancement was majorly caused by warm temperatures from March until early July. Temperatures in July and August were not far from the average, September being also warm. Additionally, those parts in the region at higher altitude suffered in late April a dramatic frost, by far much more destructive than the last widespread frost event in 1999 or, more probably, only of similar magnitude than that re1967ported in . Thus, as a consequence of earlier phenology and lower yields due to frost damage, harvest was advanced between 2 and 4 weeks from the average, the greatest advancement in the coolest areas. With regards to water availability, non-irrigated vineyards have faced to mild to severe scarcity, as the little rain received last autumn and winter was not enough to fill up water reservoirs in the soil, and rainfall during the activity period, although within the range of normality, could not overcome that deficit. Grape technological ripeness was properly reached, although phenolic ripeness was to some extent compromised at some vineyards due to the short time elapsed between veraison and harvest.